The evolution of the Kidney in vertebrates
Article posted in: Kidney Health

All vertebrate animals have kidneys, similar to that of humans. The functional unit of the kidney is the nephron, which filters the blood of small molecules and ions, reclaims the needed amounts of useful material, and excretes surplus or waste molecules via urine. In 24 hours, your kidney is able to reclaim 1,300 grams of Sodium chloride, 180 grams of glucose and close to 100% of the 180 liters of water that entered the tubules. The primary nitrogenous waste filtered by the mammalian kidney is urea. Interestingly enough, humans do not have the most efficient kidney in the within the mammalian class. For example, the kangaroo rat can produce urine that is 17 times more concentrated than its blood, even on your kidneys best day humans can only manage 3.5 times more concentrated than the blood. However, the kidney in the kangaroo rat must be much more efficient because kangaroo rats do not have the luxury of running water, and must be extremely efficient with their water intake/loss to ensure their survival because of the dry environment they live in.

Evolutionarily, mammals inherited their kidney traits before the evolution of diapsids (reptiles and birds) whose kidneys have the ability to convert nitrogenous 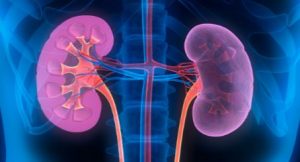 waste into uric acid. Many reptiles live in arid environments, so to cope with their surroundings they have evolved very efficient kidneys. As stated earlier, reptiles are diapsids, and can readily convert urea and other nitrogenous compounds directly into uric acid. Uric acid is not soluble in water and can be excreted with very little water. With the addition of a cloaca, reptiles are able to reabsorb most of the moisture used in the excretion of water. Both feces and “urine” (which is really just a white paste of uric acid) pass through the cloaca. Due to these extreme measures of water conservation, reptiles do not need to drink water, as the water they get from cellular respiration is enough to satisfy their metabolic needs.

Animals that live on dry land have to continually drink water, as they do not get enough from the air to complete basic metabolic processes. Freshwater vertebrates, on the other hand, face the problem of too much water in their body. In order to maintain homeostasis (metabolic balance) of the extracellular fluid, they are constantly excreting excess water. Most of the nitrogenous waste in freshwater animals are able to leave the body via diffusion out of the gills. In fish, the kidney is basically a large water pump, which maintains water balance, rather than an organ of excretion of nitrogenous compounds. Saltwater fish have the opposite problem of freshwater fish. Rather than living in an environment that is hypotonic (lots of water, low salt) they live in an environment that is hypertonic (lower water, the higher level of salt). Fish overcome this problem by constantly drinking sea water and desalinating it, and excreting the salt back to the sea. The environment that a fish lives in is a major component to the function of its kidney.